Skip to content
Listen Now
Listen Now
Bob Sirott
This is an archived article and the information in the article may be outdated. Please look at the time stamp on the story to see when it was last updated. 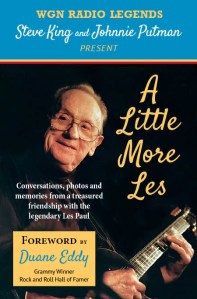 You would think that with everything that has been said and written about Les Paul — and by him — there would be no more surprises. After all, museums and historical exhibits have been created in his honor. But here come Chicago radio legends Steve King and Johnnie Putman with A Little More Les, 352 pages of conversations, photos and memories from their treasured 18-year friendship with Mr. Paul.

Each week, Les phoned them in the early hours of Tuesdays after he returned to his New Jersey home from his Monday night shows at the famed Iridium Jazz Club in Manhattan. After Les passed away in 2009, Steve and Johnnie created a weekly tribute by re-airing interview highlights with Les. “A Little More Les” became a “musthear” feature on WGN Radio.

The tribute continues in this book. Steve and Johnnie sifted through over 60 hours of interviews they did with Les, and have gleaned the “best of,” which includes some never-told stories from the man who invented the electric guitar and many innovations that revolutionized the recording industry. You’ll be treated to Les’s sharp wit, irresistible charm and creative genius. That word, genius, although thrown around freely today (every Apple Store has several!), really does define Les perfectly. Just as inventions by his fellow National Inventors Hall of Fame members Edison and Bell made our lives better, so did Les’s creations, including the electric guitar and numerous sound recording innovations. 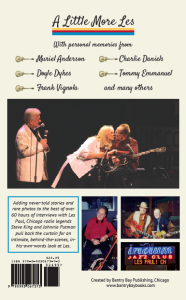 As you become immersed in these fascinating, touching and hilarious personal glimpses into what made this remarkable man tick, you’ll no doubt have many, “I didn’t know that!” moments (such as after reading that Les showed David Seville how to create the sound that became the voices of the uber-popular Chipmunks cartoon characters.) And don’t be surprised if you experience the same fate that befell Steve and Johnnie: finding yourself hopelessly in love with this rascal of a man who forever changed how music is played and recorded.

Longtime WGN listeners will love reading Steve and Johnnie’s memories, and when you toss in personal memories of Les from some of the best guitar pickers of all time: Duane Eddy, Charlie Daniels, Doyle Dykes, Tommy Emmanuel, Muriel Anderson and others, this is one of those books about which you’ll say, “I couldn’t put it down!”

Host Dane Neal invites John Ewert, Road America National Park and Speed's Director of Communications, to join the conversation over phone to discuss indie car racing and Road America's plans to re-open the track for fans enjoyment including free tickets for essential workers and ages 16 and under.

"This is our 65th anniversary... we are incredibly lucky to have such a gem in the midwest -- a short drive from Chicago and also a great way for the family to get away and do something fun and positive," Ewert said.

Phil Manicki filling in for Dave Plier | 07.03.20 | Cooler tips during the heat wave, radio business with Rick Kaempfer and more.

Host Phil Manicki fills in for Dave Plier as he kicks off the show preparing for a week of extreme heat. "Putting the the ice in the cooler first in a rookie move," Manicki says.

Author and Erkhart Press owner Rick Kaempfer joins the conversation to reminisce on his journey through the radio industry and how it led him to where he is today.

June is Pride Month. And while celebrations may look a bit different in 2020 due to the pandemic, the community comes together through flags, art and virtual celebrations. These photos walk through the variations on the Pride flag as well as the flag's history, plus murals and decorations in honor of Pride.

Now, more than ever, we can all relate to the path forward through adversity and challenge that gave birth to Pride. Sponsored by Jewel-Osco, local since 1899.

China vows retaliation against US sanctions over Xinjiang

5 Things to Know for Today

France urges Netanyahu not to annex parts of West Bank

AP Explains: Why India cases are rising to multiple peaks

US envoy, after Seoul visit, reassures Japan of alliance

WHO experts to visit China to plan COVID-19 investigation

Trump’s reelection campaign gets a reboot as virus persists

How will the city of Chicago recover from the economic devastation of COVID-19?

Income taxes due July 15th: Terry Savage explains what you need to do if you can’t make the deadline

Are you missing mail? Elise Foster from the National Association of Letter Carriers explains why that package didn’t get to you

Income taxes due July 15th: Terry Savage explains what you need to do if you can’t make the deadline

Are you missing mail? Elise Foster from the National Association of Letter Carriers explains why that package didn’t get to you