Scott discusses President Trump’s deplorable comments and we have Ted Rall one of the authors of the book “Meet The Deplorables”. What are the odds! 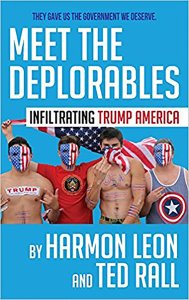 Avenatti, who is acting as his own lawyer, got to cross-examine Daniels for a second day about allegations that he stole $300,000 the performer was supposed to get from a publisher for writing a tell-all book about an alleged sexual tryst with former President Donald Trump.

A drama about an undocumented nanny in New York City, a documentary about three exiled dissidents from Tiananmen Square and another doc about Russian opposition leader Alexei Navalny won top prizes at the Sundance Film Festival. Winners were announced Friday evening in a virtual ceremony.

“Nanny,” from writer-director Nikyatu Jusu and starring Anna Diop and Michelle Monaghan, won the Grand Jury Prize in the drama category for its depiction of a Senegalese immigrant working for a wealthy family in New York City. The top jury prize for documentary went to Ben Klein and Violet Columbus for “The Exiles,” in which a documentary filmmaker attempts to finish a film she started in 1989 after the Tiananmen Square massacre.

HARRISBURG, Pa. (AP) — A court declared Friday that Pennsylvania's expansive 2-year-old mail-in voting law violates the state constitution, agreeing with challenges by Republicans who soured on the practice after former President Donald Trump began baselessly attacked it as rife with fraud in his 2020 reelection campaign.

Democratic Gov. Tom Wolf’s administration swiftly appealed to the state Supreme Court, immediately putting the party-line decision by a panel of three Republican and two Democratic judges on hold and stopping it from overturning the law.

Can you get COVID-19 from second hand smoke?

Omicron drives US deaths higher than in fall’s delta wave

MCU star was at anti-vaccine-mandate protest in DC

What is a 'bomb cyclone?'

COVID hits one of the planet's last uninfected places

GOP gubernatorial candidate Jesse Sullivan on vaccine and mask mandates: ‘On day one I would end those. I think they’re un-American, they’re hurting our children’

Can you get COVID-19 from second hand smoke?

The John Williams NewsClick: Do you approve of the Chicago tradition of Dibs?