Meet the team from WGN Radio’s Northwestern Medicine Newsroom! In this video series, you’ll get to know the reporters and anchors that bring you the news and keep you informed every day.

First up is Vic Vaughn.

Vic joined WGN Radio in 2014. You hear him overnights, 11pm to 6am, on The Nick Digilio Show and delivering Alexa “Flash Briefings” to your Amazon Echo smart speaker. 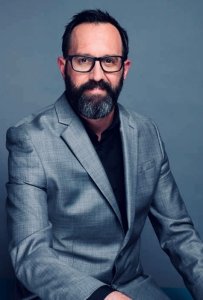 Vaughn left a career in national defense to pursue broadcasting. He previously served in support of Operation Desert Shield/Desert Storm as a member of the U.S. Air Force. After his honorable discharge, he continued to serve his country as a private military contractor. He participated in ongoing U.S. drug interdiction operations in Central America, South America, and the Caribbean and provided base support for the U.S. counter-narcotics/counter-terrorism surveillance operations in the U.S. Southern Command.

His past experience in the service is a news topic Vaughn continues to pursue. Vaughn’s series “Compelled to Serve” was awarded the distinction of “2016 Best Radio Series or Documentary” in the Chicago market by the Illinois Broadcasters Association.

Outside the newsroom, Vic loves being a dad, his partner Jeanie, Bears and Cubs and the outdoors, from fishing to riding 4x4s and everything in between. For more on Vic, be sure to follow him on Twitter and Instagram.

Bumpy road ahead: UK bracing for big spike in unemployment

US stocks move higher, pushing S&P 500 closer to a record

Trump moves against Chinese owners of TikTok and WeChat apps

Is it safe to ride public transit during the pandemic?

Plants cropping up in lost Michigan lakes where dams failed

French publisher’s jarring memoir to be released in English

Will Forte to bring parody ‘MacGruber’ to Peacock service

Sara Bareilles to star in Peacock comedy about a girl group

German nudist chases down boar who snatched his laptop

Video: Behind the scenes as John Wiedeman and Troy Murray broadcast Blackhawks hockey from a conference room

Everyone has gotten used to adapting to new ways of doing things during the pandemic. And that includes WGN Radio Blackhawks broadcasters John Wiedeman and Troy Murray. Because of rules limiting the number of people permitted at the NHL hub city venues, John and Troy are broadcasting Blackhawks games from what is normally the Bob Collins Huddle Room at the WGN Radio headquarters in downtown Chicago. The WGN engineering team has converted that small conference room into the temporary Wintrust Blackhawks Broadcast Booth. Thanks to Blackhawks All Access, take a look behind the scenes at radio magic at work:

Lawyer: LA deputies need to be held accountable for tactics

UN says more than 70 killed in clashes in South Sudan

Parents of Elijah McClain sue Colorado police over his death

A week after blast, Beirut pauses to remember the dead

The Latest: Republican ends bid on primary day after arrest

March on Washington reconfigured to comply with virus rules

State’s Attorney Kim Foxx: Once looters are arrested and brought to us, they’re prosecuted

How social media plays a role in covering protests

Ald. Brian Hopkins’ reaction to downtown looting: ‘I watched my city be taken over by lawless gangs of armed, violent criminals’

What’s next for the Mag Mile after the looting? President and CEO of The Magnificent Mile Association explains what could happen

What’s next for the Mag Mile after the looting? President and CEO of The Magnificent Mile Association explains what could happen

Father Michael Pfleger: ‘The [CPD] superintendent said it wasn’t orchestrated, but it sounds pretty orchestrated to me’

Are asymptomatic coronavirus carriers as contagious as those with symptoms?

Ald. Brian Hopkins’ reaction to downtown looting: ‘I watched my city be taken over by lawless gangs of armed, violent criminals’

The Chicago Way w/John Kass: Grief comes in all forms, especially when you say goodbye