“Returning to the Saturday nighttime slot is a full circle moment for us. Our first regular show as a duo on WGN Radio was in February 1985 – on a Saturday night. Coming back to WGN for version 2.0 seemed like a fun idea,” wrote Steve King and Johnnie Putman.  “Of course, we’ll be revisiting some of our most popular features, but we’re looking forward to seeing where version 2.0 takes us. We’re throwing a Saturday night party for our friends – and there’s no dress code!”

The award-winning husband-and-wife duo were two of the longest-running hosts on WGN and in the overnight slot for nearly three decades until December 2011. Steve and Johnnie were on the forefront of tech with segments like “Website Wednesdays” long before computers were a household item. Their shows frequently featured musicians, from the up-and-coming to the well-established, including the late guitar legend Les Paul who was a longtime friend and frequent on-air guest. The couple authored the Les Paul memoir “A Little More Les” in 2015.

“I know Steve and Johnnie’s return to a regular Saturday night show will be warmly welcomed by longtime loyal fans and new listeners alike,” said WGN Radio vice president and general manager Mary Boyle. “Before their ‘retirement’ in 2011, Steve and Johnnie owned our WGN overnight airwaves for 26 years. Back then and on their guest spots since, they always present entertainment, interviews, and information in their inimitable, ‘homespun comfort’ style of earnest, friendly listener interaction.”

Over the past few years, Steve and Johnnie have been heard on WGN Radio as fill-ins around the clock and hosting special shows like New Year’s Eve.

More with Steve and Johnnie

Since 1922, WGN Radio AM 720, a Nexstar Inc. station, has been dedicated to being the #1 source of Chicagoland news, information, entertainment, and sports. WGN Radio is the official broadcast home of the Chicago Blackhawks and Northwestern University. Listen at AM 720, online at wgnradio.com, on your WGN Radio app, smart speakers, or TuneIn. Like us on Facebook at www.facebook.com/wgnradio and follow us on Twitter @WGNRadio and Instagram @wgnradio.

Multi-grip pull-up bars promote a wide range of upper body exercises, as you can modify your grip in order to target various muscle groups.

The best place to start to build up while slimming down is with a set of dumbbells.

A good foam roller can help relieve muscle tension, muscle soreness and inflammation from your body.

‘He’s close to us’: Wheelchair users in Africa await …

How to fix a howitzer: US offers help line to Ukraine …

Trump kicks off 2024 bid with events in early voting …

‘He’s close to us’: Wheelchair users in Africa await …

How to fix a howitzer: US offers help line to Ukraine …

Trump kicks off 2024 bid with events in early voting …

Tyre Nichols’ mother: ‘No mother should have to go …

3 men linked to Iran arrested over plot to kill U.S … 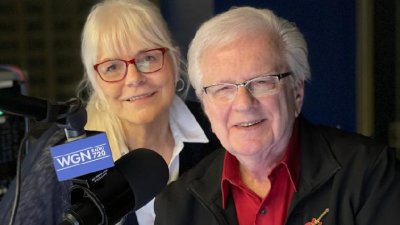 The award-winning husband-and-wife duo Steve King and Johnnie Putman were two of the longest-running hosts on WGN and in the overnight slot for nearly three decades until December 2011. “Returning to the Saturday nighttime slot is a full circle moment for us.” Click for more.

Videographer Ken Herzlich on why he retired

Calamos’ CEO predictions on the 2023 economy

What do you need to know when buying a car?