ATLANTA (WNCN) – Texas and federal officials have confirmed a case of “human monkeypox” in a U.S. resident who recently traveled from Nigeria to the United States, the CDC said in a news release Friday.

The case was confirmed Thursday and the infected person is in a hospital in Dallas, the news release said.

“Monkeypox is a rare but potentially serious viral illness that typically begins with flu-like illness and swelling of the lymph nodes and progresses to a widespread rash on the face and body,” the news release said.

Federal officials, along with the airline, are trying to contact passengers who were on two flights with the infected person – from Lagos to Atlanta on July 8, with arrival on July 9, and from Atlanta to Dallas on July 9, the news release said.

“Travelers on these flights were required to wear masks as well as in the U.S. airports due to the ongoing COVID-19 pandemic. Therefore, it’s believed the risk of spread of monkeypox via respiratory droplets to others on the planes and in the airports is low,” the news release said.

Monkeypox, an infection which lasts two to four weeks, is in the same family of viruses as smallpox but causes a milder infection, the CDC’s news release said.

In this case, laboratory testing at CDC showed the patient is infected with a strain of monkeypox most commonly seen in parts of West Africa, including Nigeria.

UK’s Truss sticks by economic plan as her party worries

A look at some of the world’s major crowd disasters

UK’s Truss sticks by economic plan as her party worries

A look at some of the world’s major crowd disasters

TikTok politics: Candidates turn to it ‘for better …

Why do flies rub their limbs together?

Cinema opens in Kashmir city after 14 years but few …

Next year’s Met Gala will celebrate the late Karl …

Moose back on the loose after rescuers free it from … 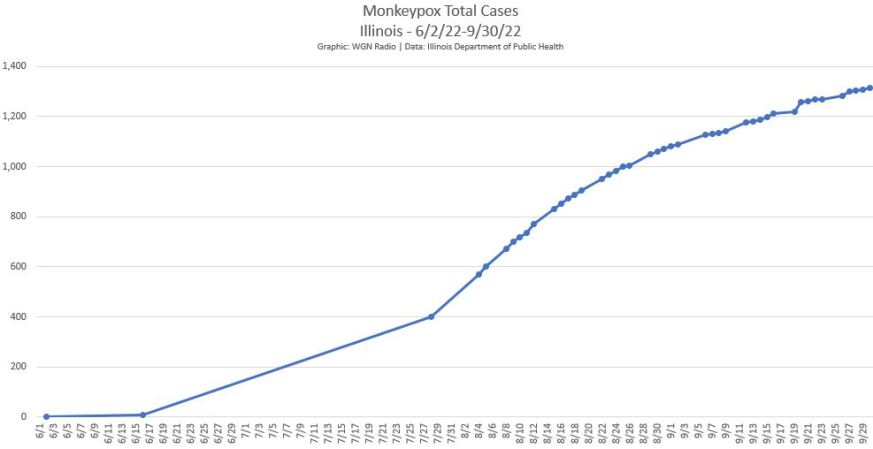 High school football team accused of acting out a …

Hurricane Ian survivors look to get off Sanibel Island

Nobel season is here: 5 things to know about the …

Escapee stole $700,000 while in prison: indictment

Chicago’s own Lecy Goranson from ‘The Conners’

How crime shows have changed courtrooms