Empire of the Sun brings to the Metro the otherworldly. Frontman [Emperor] Luke Steele and guitarist, backing vocals and producer [Lord] Nick Littlemore ask their audience to re-imagine, with the help of an angelic made-up woman projected upstage. That’s on the Empire of the Sun Decade Anniversary stop in Chicago. 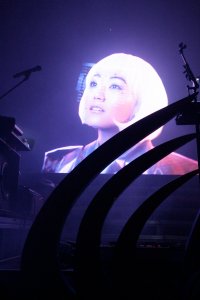 During a politically depressive moment across the world, this band makes an effort to set itself apart by reminding fans that every day is a gift. That’s what Steele said in an interview with [V] Music. Dropping “Alive” as the first single of 2013 record Ice on the Dune was part of that objective, not to get caught in the gloom and doom that inspires so much – though great – sad music for people to turn to.

Empire of the Sun wants to make its fans dance and experience the worldly colors around them at their clearest. It’s an extremely sensory performance, so much so that there was emotional pain, which transitioned to calm, which moved on to –plain and simple – firey passion Saturday night.

The photo pit was packed with boxes of gear and special effects equipment, producing masses of green and red laser beams, a neon-lit podium the shape of Steele’s helmet, perhaps his starship logo. Such a humble man is he who rocks that room, his helmet high as he descends the stairs downstage to greet elated, giggling fans.

Now, that’s Walking On A Dream. Empire of the Sun displays its ability to look within and dissect power from there, to present the glamour that accompanies it to the world. That is being good, alive and grateful. I used this particular song as the background music to a fashion show I coordinated in my first year in college, when I began making friends and discovering one of my truest passions: my own style. I started to feel confident and independent then.

Steele is responsible for breaking guitars and expressing his art through dress, makeup and digital imagery, while a guitarist stage left also humbly keeps beat with his guitar and booming taps from the synthesizer and drum pad.

The aforementioned imagery plays a major role on a stage built by Empire of the Sun, with video of animated living organisms, similar to plants, decaying and reincarnating to the rhythm of “High and Low.” It depicts the speed at which days, months and seasons transition, leading people to miss the best moments, and be ungrateful for the bad that always come with valuable lessons.

That’s why songs like “We Are The People,” with such lyrics as “We are the people who rule the world/a force running in every boy and girl,” depict the message Empire of the Sun works to convey most; self-love and humility.

A masterpiece from Hideki Matsuyama to take Masters lead

Trump: The key to Republican success is more Trumpism

“To chase around town the sounds of Chicago, and to report back to readers with my experiences.” (Click for more.)

What really caused George Floyd’s death? That’s a key question in the Derek Chauvin trial and a topic on this edition of ‘Banfield’