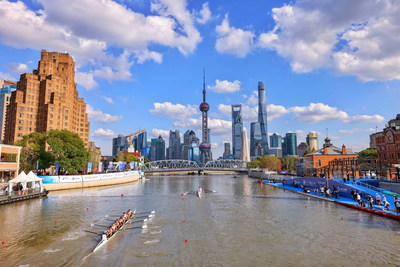 According to the report, in the Tokyo Olympic Games, the number of Shanghai athletes admitted in the Olympic Games held overseas and the gold medals they contributed to the Chinese delegation both set new records. A total of 46 Shanghai athletes participated in sports, 22 disciplines and 50 events, winning five gold, four silver and two bronze medals.

Shanghai is taking innovative measures to improve public health. 40 health centers for the elderly and 20 gymnasiums for office workers have been built in Shanghai by 2021.

The sports industry in Shanghai realized recovery and growth. From January to September in 2021, the total output of Shanghai sports industry reached 119.95 billion yuan, with an increase of 16.7% year on year.

Shanghai is accelerating the speed of transforming into a hub of international sports events. As the birthplace of rowing in China, Shanghai held the first Head of Shanghai River Regatta to combine sports and urban landscape along the Suzhou River. The FIS Cross-country Skiing China City Tour, a warm-up game for athletes to gear up for Beijing Olympic Winter Games, took place along the Huangpu River in Yangpu District, making snow events possible in the city with the help of high technology. The emblem of the 2023 AFC Asian Cup was unveiled at the Pudong Football Stadium, one of the 10 professional football stadiums for the Cup. By the end of 2020, the coverage of sports venues in the city had reached 58.5027 million square meters.