NEW ORLEANS — Well, here we go again. A horrible rule. A horrible interpretation. What is a catch, what isn’t a catch?

We’re eight seasons into this debate and the NFL’s stubborness to address the problem only leads to one conclusion: they love that we keep debating these plays.

That, of course, ignores the frustrations of the players, who risk injury and work tirelessly just to have clear-cut catches wiped from the stat books.

There’s no better example than what happened Sunday at the Mecedes-Benz Superdome when Bears tight end Zach Miller managed to haul in a 25-yard touchdown pass from Mitch Trubisky despite dislocating his left knee on the play. He jumped up, caught the ball with his hands, pulled it into his body as his left knee gave out and appeared to maintain control as he hit the ground.

It was an outstanding catch, but Miller’s teammates quickly realized something was wrong when he didn’t get up to celebrate. Trainers immediately ran on the field.

“I thought he was going to do some kind of celebration,” fellow tight end Daniel Brown said. “But then you could kind of tell, the body language just wasn’t good. My heart just sank.”

Then the replays started. And they were tough to watch.

Miller’s left knee completely gave out and he could be looking at signifcant damage to multiple ligaments. It’s just the latest brutal injury for a talented player whose career has been defined by them.

“It sucks. He’s your guy. He’s the leader of our group. Leader on the team. It sucks,” rookie tight end Adam Shaheen said.

But after the horror of the injury subsided, the reaction turned to amazement. How did Miller manage to hang onto the ball after his leg gave out? It was really impressive.

Well, impressive to everyone except Alberto Riveron, the league’s senior vice president of officiating, and referee Carl Cheffers. Because while Miller was being loaded onto a cart and getting fitted for an air cast, Riveron was determining that the catch, well, wasn’t a catch.

We should’ve known Cheffers’ explanation was going to be useless because he actually started it with this laughable statement: “Obviously we are all familiar with the process of a catch at this point.”

Here’s Dean Blandino on the call getting overturned. #bears pic.twitter.com/pOWDWU9tyP

Dean Blandino, the former head of officials who now works for FOX said: “The process of the catch ends when he hits the ground and maintains control, so that rollover is not going to be part of the catch process.”

Once again: horrible rule or horrible interpretation of the rule? In this case, it’s both.

To me, it’s the inconsistency that is most frustrating. We’ve seen other instances where the defense actually causes the ball to come loose, but the officials rule it a catch because a knee or elbow was down, ignoring that the receiver didn’t complete the catch all the way to the ground.

Remember, the Bears had a 77-yard interception return for a touchdown wiped out in the preseason because this was ruled a catch:

I actually had an exchange with Blandino on Twitter about this play back in August, and he explained: 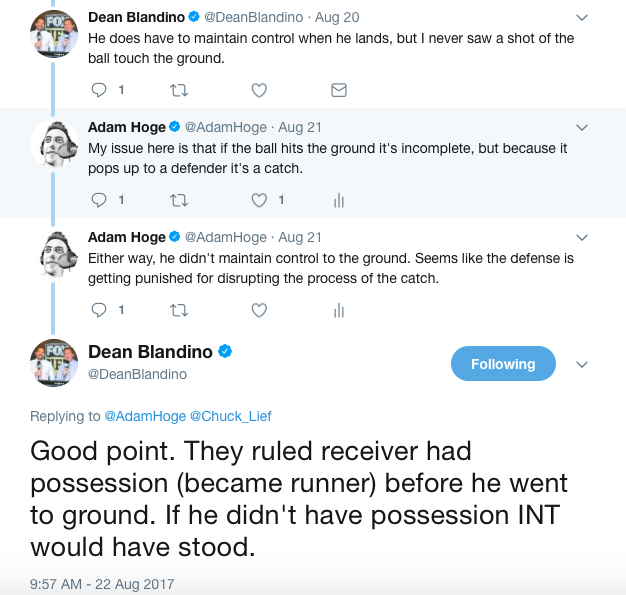 So basically, in this case, the receiver was deemed a runner, and thus didn’t have to maintain control to the ground. The inconsistency is maddening.

But why was the receiver deemed a runner?

So now we’re talking about receivers needing to have three feet down, instead of two. Why does it have to be this complicated?

Runners merely need to get the nose of the football over the goal line for a touchdown. Receivers have to do a whole lot more. In Miller’s case, the officials apparently wanted him to secure the football all the way to hospital.

And the NFL doesn’t seem to care.

“It’s incredible how clear (the officials) are with respect to the rule and how the rule is to be administered, and how supportive they are of the current rule giving them that judgment of that element of time,” Rich McKay, chairman of the NFL’s competition committee, said in a Detroit Free Press story back in March. “There’s been this talk about could we create a more objective standard, really because of replay. And I think they feel as on-field officials that would definitely hinder them as they use the subjective standard of time.”

Hey, look. Another explanation that is more nuanced than the rule.

Adam Hoge covers the Chicago Bears for WGN Radio and WGNRadio.com. He also co-hosts The Beat, weekends on 720 WGN. Follow him on Twitter at @AdamHoge.

Will Toews and Kane start the season with the Blackhawks?

Joe Brand reflects on the hiring of Luke Richardson

Which Chicago food to win an eating competition?

Darren Bailey: ‘Banning abortion is not a solution’